In a cascading market Wednesday, at least one industry bucked the tide: cannabis.

Looking for anything good on the day’s list of gainers, there were dozens of bear-bet exchange-traded funds. Then came Tilray (ticker: TLRY), the Canadian pot grower whose stock has been one of the market’s most volatile, of late. Tuesday, it sank despite a table-pounding recommendation by its banker. Amid Wednesday’s rout, it gained 6% to finish at $137. Another big grower, Aphria (APH.Canada), shot up 15% to C$20.06 (U.S.$15.37), on rumors that tobacco giant Altria Group (MO) was considering a deal. Aphria issued a statement that there was no deal for it to announce. 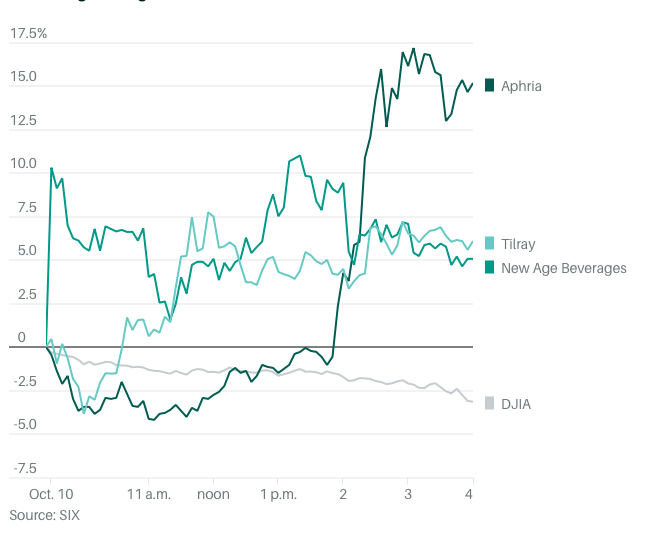 Perhaps traders remembered that one week from Wednesday—Oct. 17—is the day that recreational pot becomes legal in Canada.

Or maybe a more subtle calculation was at work. Days like Wednesday are the reason that sophisticated investors seek assets whose returns are uncorrelated with the market. Some assets once considered uncorrelated—timber, for instance—have proven busts. Perhaps the next uncorrelated asset is weed.

Stocks like Tilray and New Age Beverage are popular among a retail investing crowd that isn’t driven by the imperatives of the market’s institutional traders. Look at the returns of the billion-dollar Horizons Marijuana Life Sciences Index ETF (HMMJ.Canada) and you’ll see little correlation with market indexes. On Wednesday, the ETF was up 1%, to C$23.72.

Clever strategies like the market’s weed hedge are a game of averages, of course. The biggest pot stocks, Canopy Growth (CGC) and Aurora Cannabis(ACB.Canada), both fell with the market Wednesday.

You can say that again.