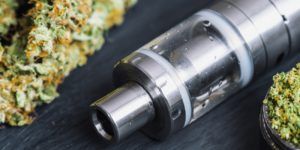 A Washington state man is suing six cannabis vape companies for allegedly causing his lung illness, reportedly the first suit of its kind in the state.

The suit filed by Herrmann Law Group on behalf of Charles Wilcoxen, a Puyallup Tribal Police officer, claims marijuana vape products caused him to come down with lipoid pneumonia, which put him in the hospital earlier this month.

The six companies named in the lawsuit are:

In the complaint, Wilcoxen alleges the vaporizer he purchased and used was made by CCell, a Chinese corporation, and distributed by Canna Brand Solutions.

The other companies named in the suit manufactured or sold the vape cartridges that Wilcoxen alleges made him sick.

Canna Brand Solutions declined to comment for this story.

Meanwhile, the Utah Department of Health announced that 47 cases of lung damage related to vaping cases have been reported, according to the Associated Press.

The department says 90% of the people who got sick reported vaping THC.

However, Utah doesn’t have a licensed marijuana program. The regulators shepherding the medical cannabis program are hoping for a March 2020 launch.

Nationwide, more than 500 lung illnesses and nine deaths have been linked to vaping.