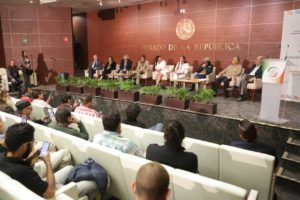 Mexico’s main regulatory body for medical cannabis revoked key guidelines used as the basis for issuing dozens of import licenses for low-THC products, putting the status of those permits into question, pending a government review.

On Wednesday, COFEPRIS revoked those guidelines, which had been published Oct. 30, 2018, saying they contravene the decree that allowed for medical cannabis in the country.

Current authorities will review the validity of the “supposed authorizations” granted by the previous government.

COFEPRIS, an organ of Mexico’s Health Secretariat, also said it revoked the previous guidelines because they:

Since the initial round of permits were issued in November, the agency had approved 19 more.

Canada’s Aurora Cannabis was one of the international companies that rushed in to sign a letter of intent to acquire Farmacias Magistrales, one of the first permit holders.

Khiron Life Sciences – which primarily does business in Colombia – also announced in December that it “received approval from (COFEPRIS) to import and commercialize three products of the company’s Nutraceutical Line.”

Few, if any, of the 57 authorized products were actually imported into Mexico, as the permits were almost immediately challenged by Mexico’s president of the foreign trade commission.

According to Mexico’s economy secretariat – the national authority that oversees import and export restrictions – the permits were improperly granted and, thus, imports would not be authorized.

In the meantime, a bill is being discussed in Mexico’s Parliament that would legalize cannabis in all forms.

In a Senate forum this month, the government body said “legalization is imminent,” with medical and scientific uses expected to be regulated by October 2019.

The forum was led by Senator Jesusa Rodriguez, who replaced former Senator Olga Sanchez Cordero when the latter assumed the role of secretary of the interior in Mexico in December.

Rodriguez mentioned that profits from legal cannabis sales should be for the Mexican people and not for “money-addict multinationals.”

Sign up for our weekly international cannabis business newsletter below.