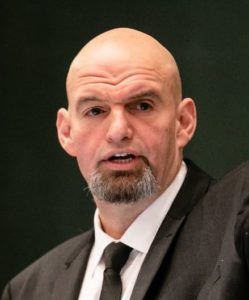 Pennsylvania successfully rolled out a medical marijuana program and now, having reversed course and with legalization pressure building in the Northeast, Democratic Gov. Tom Wolf is open to considering legalizing adult-use marijuana.

The state’s approach is a deliberate one. As a first step, Lt. Gov. John Fetterman is conducting “listening sessions” in each of the state’s 67 counties.

Fetterman, a former mayor of the Rust Belt town of Braddock, said he’s been a longtime advocate of marijuana.

But he stressed that he is focused on listening during the town hall-style meetings, not promoting his own views.

Marijuana Business Daily spoke with Fetterman in March about what he’s learned so far. He has since completed about half the sessions.

What’s struck you about what constituents are telling you about legalization?

It was only two nights ago when I heard my first negative comment about our new (medical) marijuana legislation.

That’s a huge development because Pennsylvania hasn’t always been there. And I think that’s a tribute to the quality of legislation that was crafted and also the unending testimony of the benefits that medical cannabis is bringing to people.

You can’t judge a book by its cover, whether they’re going to be pro or con. I’ve had two old little ladies come up and say, “I’ve been smoking cannabis for 50 years.”

How does your history as a champion of social justice as the mayor of Braddock enter into this discussion of marijuana legalization?

Personally, I’m gratified the nation’s views have changed. In 2015 (and 2016), when I ran for the (U.S.) Senate, I was the only candidate in the race who was for full legalization. And I did it for a lot of different reasons.

First and foremost, it was the justice aspect. The fact that you had so many people whose records have been stained by petty drug convictions. They’re held back from participating and contributing more fully (in society).

Secondly was the revenue. There’s never been an evolution of my views.

Why is it important for Pennsylvania to explore legalizing adult-use marijuana now?

Because it’s a critical public-policy topic. We’ve had over 20,000 people weigh in online just in the last couple of weeks. We average somewhere between 175 and 215 people at every (listening) session.

What kind of market does the administration envision?

You can be sure there’s going to be plenty of restrictions. That’s what I hear from the pros and cons. There’s got to be guidelines and rules in place that keep it out of the hands of children. We’re not talking about some free-for-all.

What do you think the odds are of this happening this year or next year?

I wouldn’t know. I personally call and invite every state representative and senator to come to the listening tour regardless of what their views are.

We really strive for transparency. Everyone is free to share their views, whether you’re on the spectrum of Cheech and Chong or all the way to “Reefer Madness” or anywhere in between.

What do you detect with the Legislature, do you see a shift?

I think some people assumed it was going to be like some kind of head shop, and it’s like going to the Apple store and picking out a new phone or something. And that changes the hearts and minds of people, too.

The Republicans who may not be there on legalization for recreational, I would commend them for passing (medical).

Which Pennsylvania counties have the most positive reaction?

Typically, the more populated ones like Erie or Harrisburg. Philadelphia will be robustly pro.

Pennsylvania is like a mini-America. You’ve got the two blue coasts, if you will, and you’ve got a lot of red in the middle. So, it’s a good metaphor for America.

Your wife found relief from medical marijuana. Can you elaborate?

Yeah, she had a horseback riding accident and she’s had just terrible back pain and she never would go on opioids for well-documented reasons. When (medical marijuana) came to Pennsylvania, it was a godsend for her.

She would have days when we first married when she would seize up and we’d have to wheel her to a chiropractor just to get her comfortable. Cannabis has allowed that pain to remain in the background. It’s been wonderful for her.