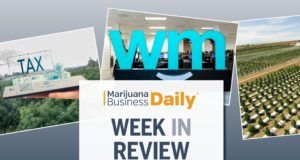 Colorado’s largest marijuana cultivator suffers an early freeze that is expected to trigger a supply disruption in the state, more than 100 Weedmaps employees receive pink slips, enforcement efforts intensify to root out corruption in local and state cannabis licensing – and more of the week’s top cannabis business news.

MJBizDaily takeaway: As the state’s largest supplier of low-grade flower and material for extraction, what affects Los Suenos affects the entire recreational marijuana market in Colorado.

The cost of material for extraction is likely to increase, as well as the cost of bottom-shelf flower for pre-rolls and budget ounces at the retail level.

Other cannabis growers likely won’t mind, though, since the state’s wholesale flower market has been undersupplied – resulting in higher prices – for the past few months.

This news should help to continue that trend at least a little longer.

Cannabis online advertising giant Weedmaps laid off more than 100 employees, citing the slow rollout of recreational marijuana markets as one cause for the downsizing.

MJBizDaily takeaway: California-based Weedmaps has come under fire recently for its practice of advertising for unlicensed marijuana retailers and delivery services.

The job cuts reflect new hurdles for the company: the slow rollout of recreational marijuana markets in California and Massachusetts as well as a shrinking pool of outside capital. Other cannabis companies are facing these problems, too.

Nevada, California and the latter state’s capital city, Sacramento, want to get to the bottom of potential corruption in cannabis licensing after details disclosed in federal charges against a group that includes individuals with ties to President Trump’s personal lawyer, Rudy Giuliani.

Nevada’s governor, Steve Sisolak, also wants a task force to investigate broader licensing issues in his state, while Sacramento’s cannabis licensing program already was being investigated by the FBI.

MJBizDaily takeaway: It’s apparent that enforcement efforts are intensifying to root out corruption in local and state cannabis licensing.

Cannabis businesses that are above-board should take that as good news.

The idea behind these licensing probes is to clean up the industry and to create level playing fields for all marijuana license applicants.

Among the recent marijuana-related bills signed into law by California Gov. Gavin Newsom is a measure that will allow some cannabis businesses in the state – those filing taxes as sole proprietors or partnerships – to deduct operating expenses on state income taxes.

A similar move was vetoed by former Gov. Jerry Brown.

MJBizDaily takeaway: It remains against federal tax law for cannabis companies to deduct operating expenses – the so-called 280E problem referring to that section of the IRS code.

The move by California is notable since it gives a measure of relief to some state-legal cannabis companies in terms of their expenses.

However, as industry experts pointed out, most California marijuana businesses are set up as limited liability companies (LLCs) or corporations and won’t benefit from the new legislation.

Guests at the Fairmont Miramar Hotel & Bungalows in Santa Monica, California, can receive cannabis product delivery to their rooms thanks to a partnership between the resort and Eaze Hospitality and Recreational Embassy.

The partnership gives Fairmont guests access to cannabis in a municipality that prohibits recreational stores and cultivation operations within its boundaries.

MJBizDaily takeaway: This deal underlines how partnering with mainstream companies can give cannabis businesses an introduction to customers they otherwise might not easily reach.