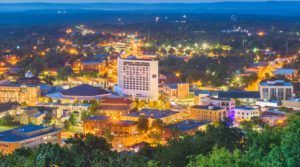 Sales of medical cannabis in Arkansas continue at a strong pace, totaling $12.35 million in the first five months of the program.

At this rate, sales are on pace to reach the upper end if not exceed Marijuana Business Factbook projections of $15 million-$20 million for 2019.

The sales, representing 1,730 pounds of marijuana, were achieved with just a fraction of the licensed dispensaries in operation.

Arkansas issued 32 dispensary licenses, but only nine are in operation, with the 10th just approved to begin operations on Friday, according to Scott Hardin, spokesman for the Arkansas Alcohol and Beverage Control, which is responsible for licensing.

Dispensaries in the state initially sold only dry flower. Now, several products are available, and edibles have become a significant portion of the overall sales, Hardin wrote in an email to Marijuana Business Daily.

The state is in the process of finalizing processor rules. As soon as the rules are final and the application period established, the state will accept applications, Hardin wrote.

“There will not be a limit on the number of processor licenses issued,” he noted.

As of Oct. 4, 24,414 patients had been approved for medical marijuana cards.

That’s double the number in mid-May. The program launched on May 10.