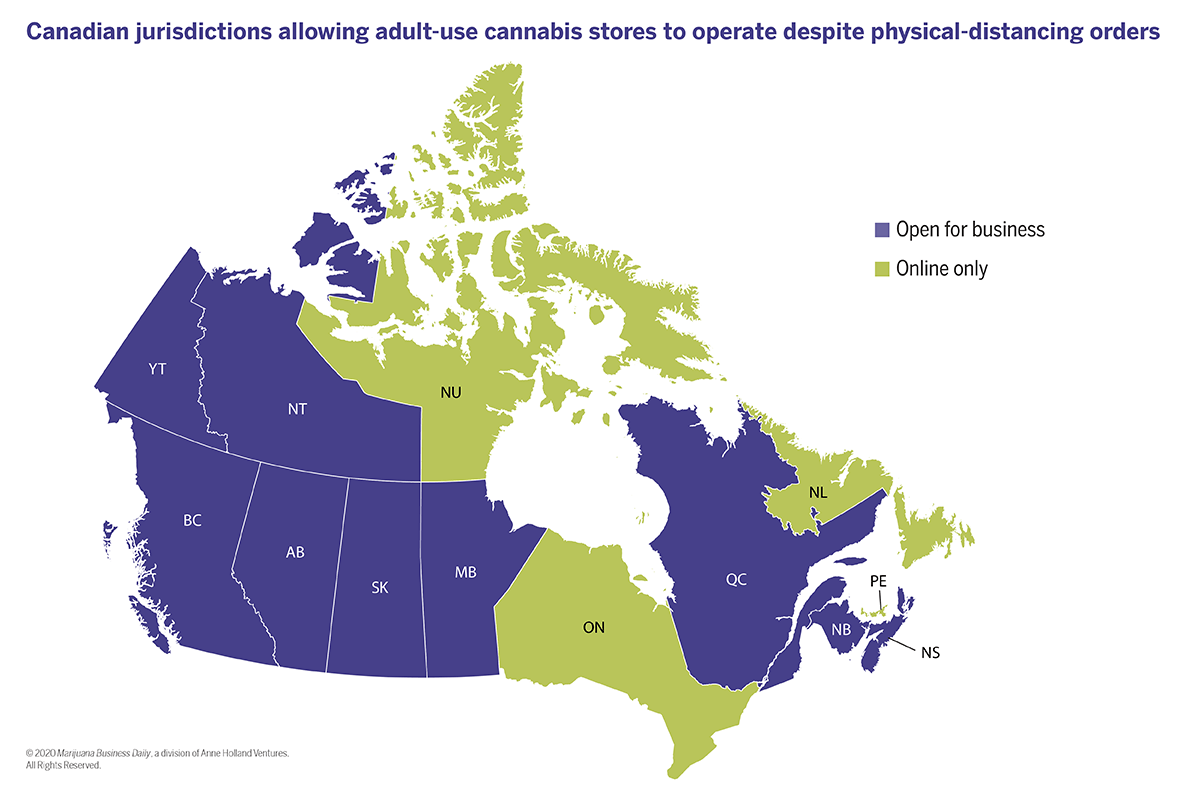 (This story has been updated to reflect that Ontario’s adult-use cannabis stores must close their doors as of 11:59 p.m. Saturday, April 4.)

The vast majority of Canada’s provincial governments are allowing recreational cannabis stores to stay open during the coronavirus outbreak, in effect designating these businesses as “essential.”

The decision by provincial governments to permit adult-use businesses to continue operating has provided a financial lifeline to these companies, even though most private-sector cannabis stores in Canada can’t offer home cannabis delivery because of provincial regulations.

While overall cannabis production is regulated by Canada’s federal government, the country’s recreational cannabis storefronts fall under the jurisdiction of provincial governments.

Those governments have taken their own approaches to business closures during the pandemic, but they’ve generally designated certain businesses as essential and required or encouraged other businesses to close temporarily.

Even though Canada’s cannabis stores might be open now, the situation could easily change during the fast-moving pandemic.

When Ontario Premier Doug Ford announced nonessential business closures in Canada’s largest province on March 23, for example, he made clear that his government was prepared to extend the closure order if needed.

As of April 2, here’s where each Canadian province and territory stands on keeping cannabis businesses open:

British Columbia: B.C. has issued more than 200 recreational cannabis store licenses to date and is home to more than 80 federal cannabis licenses. The provincial government said those cannabis retailers and producers may remain open as “essential businesses” during the COVID-19 crisis.

Alberta: The province has issued over 400 cannabis store licenses, more than any other Canadian jurisdiction, and boasts about 40 federal cannabis license holders.

Saskatchewan: Unlike some other retailers in Saskatchewan, licensed cannabis stores are considered an “allowable business service” and may remain open.

Although Saskatchewan’s list of allowable business services doesn’t explicitly include cannabis production, it does permit “production, processing and supply chains” for the agriculture and manufacturing sectors to continue operating.

Manitoba: Licensed cannabis retailers and licensed cannabis producers have been designated critical services by the provincial government, so they may remain open during a mandated closure of noncritical businesses between April 1 and April 14.

Critical businesses such as cannabis retailers that allow members of the public to enter must “ensure that appropriate social-distancing rules are followed.” Manitoba is home to six federal cannabis license holders and has issued 30 cannabis store licenses to date.

Ontario: Ontario’s government announced on April 3 that licensed cannabis stores must close their doors as of 11:59 p.m. on Saturday, April 4, but cultivators may remain operational. That means private-sector stores have no effective sales channel, because the provincial government maintains a legal monopoly over online sales. Ontario is Canada’s biggest province and home to roughly half the country’s federally approved producers.

Quebec: The government-owned Societe quebecoise du cannabis, the only legal cannabis retailer in Quebec, was designated a “priority commercial enterprise” by the provincial government and may remain open.

“All businesses that produce inputs or raw materials necessary for priority services and activities must maintain their activities accordingly, bearing in mind the directives from public health authorities,” the Quebec government said. The province is home to 31 of Canada’s 342 federal cannabis licenses.

New Brunswick: The Atlantic province has declared a state of emergency, but government-owned Cannabis NB stores have been kept open with reduced hours.

Such businesses may remain open as long as they keep a distance of 6 feet between people or limit the number of customers to no more than five at a time.

The government-owned Nova Scotia Liquor Corp., which is the only legal adult-use cannabis retailer in the province, has reduced store hours as a result of COVID-19. Twelve federal cannabis license holders are in Nova Scotia.

PEI Cannabis is still offering online ordering for recreational cannabis. PEI is home to three federal cannabis license holders, and marijuana manufacturers are not listed on the province’s list of nonessential services.

Newfoundland and Labrador: Cannabis retailers in Newfoundland have been ordered to close for “in-person service.”

Nonretail businesses in the province, such as cannabis cultivators, may remain open as long as workers can engage in physical distancing, remaining at least 6 feet apart from each other.

Yukon Territory: Recreational cannabis retailers in the Yukon have not been included in government orders to close certain businesses.

Solomon Israel is a reporter for Marijuana Business Daily, based in Winnipeg. He can be reached at [email protected]

(Click here to see a map of where U.S. cannabis businesses may continue operating after state governments have ordered residents to remain in their homes and nonessential businesses to close.)

For more of Marijuana Business Daily’s ongoing coverage of the coronavirus pandemic and its effects on the cannabis industry, click here.