Canada exported record amount of dried cannabis in 2019, but mostly to one market 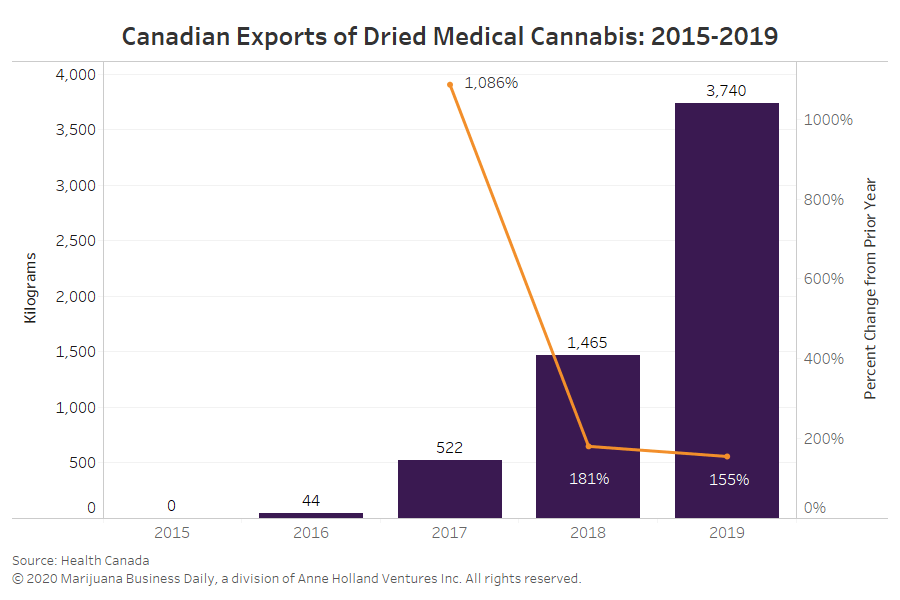 (The chart above has been corrected to reflect that percentage of change is from the prior year.)

(This is the first in a three-part series about Canada’s exports of medical cannabis.)

Canadian businesses exported more dried medical cannabis than ever last year, but that growth is expected to be challenged when the country’s main export destination – Germany – initiates local production later this year.

In 2019, federally regulated producers in Canada exported roughly 3,740 kilograms (8,245 pounds) of dried cannabis for medical and scientific use, according to data Health Canada provided to Marijuana Business Daily.

Canada’s international cannabis shipments in 2019 likely made the country the second-largest exporter of dried medical cannabis in the world, after the Netherlands.

That country exported 4,370 kilograms of medical cannabis flower in 2019, of which 1,000 kilograms were used for dronabinol manufacturing, according to the latest edition of the MJBizDaily report, “Medical Cannabis in Europe: The Markets and Opportunities.”

However, export growth for dried cannabis is showing signs of slowing as Canadian companies struggle to find new international destinations for flower.

The data also suggests international export destinations for dried medical cannabis are few and far between, as oil and oil-derived products make up a bigger share of growth.

Germany was the main destination for Canada’s dried cannabis.

Just over 94% of the 3,740.232 kilograms of dried product exported from Canada last year went to the European Union country.

Germany imported roughly 6,714 kilograms of medical cannabis flower in 2019 from all destinations – both for pharmacy dispensing and redistribution in the EU – meaning Canada provided 52% of Germany’s imported flower. Most of the rest came from the Netherlands.

A little more than 204 kilograms of Canadian dried cannabis went to Australia.

The rest – 7.2 kilograms – was shipped to Israel, Poland, Portugal and other countries that Health Canada would not identify, citing confidential business information.

Health Canada approved roughly 7,389 kilograms of dried cannabis for export in 2019 for medical or scientific use. In other words, about 50% of the approved total actually left the country last year.

Two factors account for the difference between actual exports and the total approved for shipment overseas, Health Canada said:

Local medical cannabis production in Germany is slated to start coming online later in 2020, and those products will begin to displace imports.

That means, as early as this fall, Germany won’t need as much Canadian medical cannabis.

Experts are warning Canadian producers to be more strategic.

“The decision is typically based on what they are already doing today for the Canadian market – a ‘Field of Dreams’ strategy,” he wrote in an email, referring to the practice of building to scale first and identifying target customers and core competencies later.

“In other cases, the company is looking for a market to offload excess capacity or needs to tell a good story to their investors or the public markets.

“Exporters should evaluate these choices based on a number of factors such as the market demand in the target country, the exporter’s ability to secure good commercial terms with the channel – e.g., with distributors – their ability to secure regulatory approval and what they can or are currently growing/producing/delivering at scale and in a repeatable fashion,” he said.

“Canadian cannabis companies depending on dried flower exports need to absolutely look at other options in terms of products,” he said in a phone interview.

Anand said the portion of the market that flower represents in Germany is slowly decreasing.

Germany is still the largest market in Europe for medical cannabis.

The country saw annual sales in 2019 of at least 170 million euros ($192 million), according to the “Medical Cannabis in Europe” report.

Across Europe, annual sales were between 230 million-250 million euros. 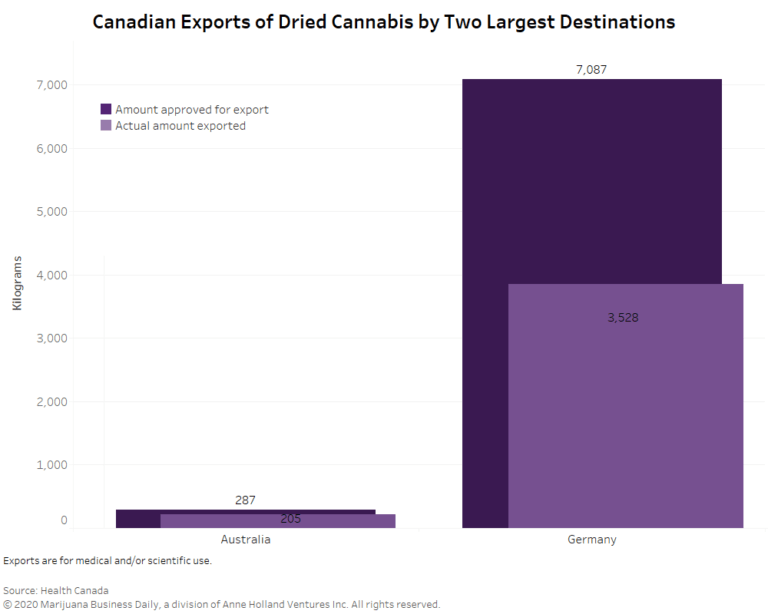 The cost is steep to bring a facility into regulatory compliance in Canada to allow for medical cannabis exports, so how do companies determine whether it’s worth it?

“This is a complicated question which requires a detailed cost-benefit financial and strategic analysis as well as scenario planning,” Osak said.

“Too often, exporting ends up being a strategy that makes sense on paper but proves unrealistic to execute based on a lack of capital, exporting expertise and management focus and patience.”

Osak suggests management estimate compliance costs – startup and ongoing – as well as a realistic assessment of how long it will take them to secure the necessary licenses and standards.

“On the demand side, firms need to assess local market demand – today, one and three years out – local channel support and (then) to estimate how long their ‘market window’ will stay open before local producers and other exporters jump in aggressively,” he said.

Regulatory noncompliance can also come at a high cost for exporters.

In November 2019, MJBizDaily reported that Alberta-based Aurora Cannabis had to stop selling medical marijuana products in Germany because it had undergone ionizing irradiation and distribution without the appropriate permit.

The company’s international sales of medical cannabis decreased 64% in its quarter ending Dec. 31, 2019, to only CA$1.8 million because of the temporary sales suspension.

Before issuing a permit to export, Health Canada said it considers:

Export permits are issued for a maximum quantity of cannabis within a specified time period.

Permits come with a fee of 637 Canadian dollars ($475), which is adjusted annually on April 1 by the rate of the Consumer Price Index.

There are no other fees specific to the review of applications, according to Health Canada.