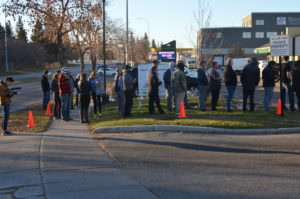 Customers line up to enter a cannabis store in Calgary on the first day of legal sales one year ago. (Photo by Lindsey Bartlett)

A heavy regulatory burden at all levels of government put a damper on legal cannabis sales in the first year of Canada’s adult-use market, but experts are optimistic provincial and federal governments could ease certain rules over time, leading to more business-friendly environments.

Until then, however, businesses say that some rules limit their competitiveness with the illicit market at a time when capital is becoming more constrained.

Greg McLeish of Toronto-headquartered Mackie Research Capital wants regulators to adapt to the current reality so Canada can maintain its early leadership position.

Provincial governments need to loosen their grip on prospective retailers to allow more stores to open, he said.

Most of Canada’s retail stores are located in one province, Alberta, while Ontario is stuck at just 24 physical outlets.

McLeish said the federal government should:

“A lot of public companies that have raised capital in order to compete are losing out on opportunity, and it’s destroying equity values in these companies,” he noted.

However, regulated cannabis sales accounted for only 14% of total demand by volume in June, according to a recent analysis by market researcher TheCannalysts – meaning the legal market still has a long way to go toward replacing illicit sales.

Maire Jones, managing director of the RNMKR Agency in Toronto, said strict rules around advertising should be loosened to help businesses communicate with consumers and to promote education.

“We help our clients sell products, but I also believe strongly in helping people make choices,” she said. “I want to give (consumers) as much information as possible, and our pathway is hampered by the current regulations.

Rules severely limiting advertising mean companies are using other methods to get their message out.

Chuck Rifici, chair of international cannabis company Auxly, said the rules essentially lead to an even playing field for businesses.

That ends up being beneficial for smaller companies that wouldn’t have the marketing resources to compete with the likes of Aurora Cannabis or Canopy Growth if advertising was allowed.

“My concern on branding and advertising rules involves Canadian competitiveness and the long-term value of Canadian-based brands, compared to having to compete with U.S. brands on a global scale,” he said.

“Future consumers around the world are going to be much more exposed to U.S. brands because of the rules around what we can do in Canada.”

A co-founder of Tweed, he expects THC limits per package to be eased.

A limit of 10 milligrams of THC will be imposed per package of cannabis edibles when they go on sale later this year – a constraint industry stakeholders say will raise costs and create unnecessary waste.

“One area where I expect to see change is on the limits per package,” Rifici said. “I think 10 milligrams as a dose is reasonable in the rec market, but to have an entire package around a 10-milligram dose is the area I could see coming into play, just mainly because of the packaging waste.”

Rifici said the regulated market has taken a small bite out of the total market, but that’s going to improve as more stores are opened in provinces like Ontario.

“For Year One, I think that’s a great start, and it’s going to keep increasing.”