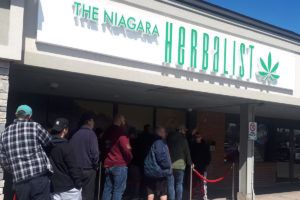 A line outside one of the first Ontario cannabis stores in April.

(This story has been updated with details about this potentially being the province’s last license lottery.)

Canada’s largest marijuana market is poised to see a boost in the number of stores serving its adult-use consumers – now that Ontario has announced the winners of its latest cannabis store lottery – but experts say the market will remain “significantly underserved” even after the new outlets open.

Ontario on Wednesday revealed the winners of a second lottery to distribute 42 new retail licenses across the province, bringing the number of stores that will serve the recreational cannabis market to 75.

The province indicated this may be its last cannabis store lottery.

“In the future, if the government proceeds with additional retail store allocations before moving to an open marketplace, any such allocations may be based on the results from this lottery,” the Alcohol and Gaming Commission of Ontario (AGCO) said in a statement.

The 42 stores will be allocated in:

The 75 stores include eight locations divvied up between Ontario’s 133 First Nations communities.

The lottery drew 4,864 eligible expressions of interest, according to the AGCO.

The new stores in Ontario, meanwhile, will only scratch the surface of meeting demand for adult-use cannabis, experts predicted.

“We just need to look to some of the comparative jurisdictions to know that we are, and will continue to be after this lottery, significantly underserved,” said David Phillips, principal and general counsel at Toronto communications firm Navigator.

Alberta, for comparison, has already licensed 270 cannabis providers, while British Columbia is up to 61 licensed cannabis retailers.

“I don’t think there’s any question that the (Ontario) market can bear a significantly larger number of stores,” Phillips said. “It’s simply a question as to whether the province will move to an open allocation or if will continue with this more incremental, staggered process in the next round.”

Ontario has blamed the slow rollout of stores on a shortage of adult-use products, but the province has refused to elaborate on the extent of the shortfall. (New Brunswick, for example, said it received 11% of the cannabis products it ordered from cultivators “consistently” in the early months of legalization.)

“At this point, with the supply chain situation considered to be vastly improved, it’s time for the government to return to the policy objectives set out in the legislation and move on from the lottery system,” he said.

Ontario increased the requirements this time around for entrepreneurs to join the lottery, asking for, among other things:

Some lottery hopefuls said the new process was unfair, citing financial institutions such as the Bank of Montreal charging potential clients CA$3,000 for an “initial review,” according to documents viewed by Marijuana Business Daily. There also was an annual charge of CA$1,000.

The new stores are expected to provide a major boost to the province’s sales.

“There’s very clearly, at least in these early stages, post-legalization, a preference on the part of consumers to visit a store, to interact with sales staff, to get that experience that they simply can’t get through online sales channels,” said Phillips, also a former executive at the Ontario Cannabis Retail Corp.

Phillips wants to see an evidence-based evaluation on the number of stores the Ontario market needs, along with an assessment on the available supply, ahead of the next rollout of stores in Ontario.

The 42 lottery winners have until Aug. 28 to apply for a cannabis Retail Operator Licence and a Retail Store Authorization.

The AGCO will then conduct a “full eligibility and licensing review.”

“It is anticipated that stores will begin to open starting in October 2019, as they are ready,” the AGCO said in the statement.