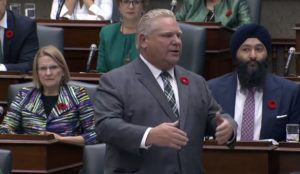 Ontario’s government is still not releasing key details on when it will significantly expand the number of adult-use cannabis stores, while a new analysis suggests the slow rollout of storefronts has already cost the province’s fledgling industry about 325 million Canadian dollars ($246 million) in foregone revenue.

In the Economic Outlook introduced Wednesday in the Ontario Legislative Assembly, the province reiterated its commitment to “an open allocation of cannabis retail store licenses where the number of stores is limited only by market demand” in a still undefined period of time.

Ontario also reiterated its plan to eventually approve “farm-gate” sales – originally announced over a year ago. But it failed to offer a new timeline when such producer-to-consumer transactions would begin.

“The government is also proposing to amend legislation to facilitate the establishment of retail stores by licensed producers related to their production sites, which would further increase consumer access to legal retail stores,” the economic update said, referring to farm-gate sales.

The government plans to amend its legislation to allow retail stores to sell cannabis products online for in-store pickup by consumers – referred to as “click-and-collect.”

“This would help ensure consumers’ preferred cannabis products are available and would decrease wait times at retail stores,” the Economic Outlook noted.

Delivery would remain the responsibility of the provincial-run Ontario Cannabis Store.

Ontario also reiterated that it is consulting with licensed cannabis producers and retailers on private-sector participation in wholesale.

The Cannabis Council of Canada, an industry trade group, praised the government’s action Wednesday, calling it “a strong signal to the legal cannabis industry in Ontario.”

However, the Council urged the government “to immediately announce a timeline for retail expansion in the province.”

“This needs to be done now for the sake of industry, job creation and the sustainability of cannabis sector jobs in Ontario,” it said.

Last week, the group challenged Ontario to increase the number of cannabis outlets, noting the province’s tiny retail footprint is “severely challenging” companies’ ability to invest in the new industry.

Only 24 stores have been authorized to open their doors in Ontario, while Alberta has authorized 321 providers.

According to an analysis by market researcher TheCannalysts, Ontario’s slow store rollout is costing the regulated cannabis industry hundreds of millions of dollars.

“Had Ontario rolled out as efficiently as Alberta, we would’ve have been over CA$510 million in sales from October to August,” said Craig Wiggins, managing director of TheCannalysts.

The CA$510 million refers to the CA$325 million in lost sales plus the CA$185 million in actual sales of adult-use cannabis in Ontario since legalization.

“In an industry where most licensed producers are struggling to achieve profitability, every extra bit of revenue will definitely help,” he said.

Jo Vos, managing director for Leafly Canada, said the measures announced Wednesday are a step in the right direction.

“But there is quite a bit more detail that needs to be addressed,” she said.

“It’s a positive thing for Leafly, it’s great for retailers, it’s only going to further access points for consumers, which aligns with the federal government and is what the province has their line of sight on.”