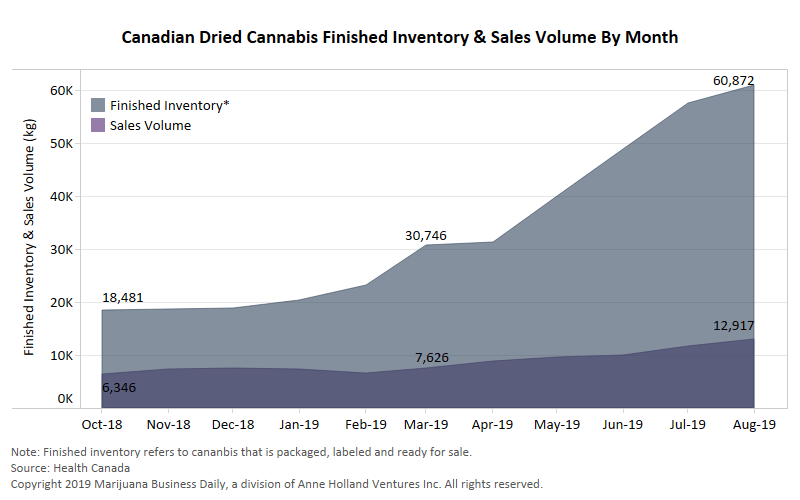 The shortage of cannabis that plagued businesses in the early months of legalization is over, according to an industry group representing Canada’s biggest marijuana producers.

“There is ample supply of cannabis for the adult recreational market,” Cannabis Council of Canada wrote in an open letter to Ontario Premier Doug Ford, who cited the shortfall when capping the number of stores the province would allow to open.

“There simply is no longer a shortage,” according to the group’s letter.

The Cannabis Council represents 35 federally licensed cultivators, who account for about 90% of the production of Canada’s legal cannabis industry.

New data from the country’s federal regulator back up the group’s claim.

At the same time, the volume of dried cannabis sold was 12,917 kilograms in August – just 21% of the inventory held by cultivators, processors, distributors and retailers.

Provinces such as Ontario cited the shortage as a reason to limit retail expansion. (Ontario has only 24 marijuana stores open; Alberta has licensed more than 300.)

Dried cannabis proved to be more popular than oil in the first year of Canada’s legal recreational market.

About half the 11,705 liters of cannabis oil sold in August was for the medical market.

Whereas the medical market accounted for 9% of the 12,917 kilograms of dried cannabis sales that month.

Finished inventory of cannabis oil more than tripled in the past year to more than 100,000 liters (3,092 gallons) as of August.

Retail-level sales of adult-use cannabis were 54 million Canadian dollars ($41 million) in November 2018 – the first full month of legalization – and rose to CA$127 million in August.

Edibles, extracts and topical cannabis products are going to slowly be introduced into the market starting in mid-December.