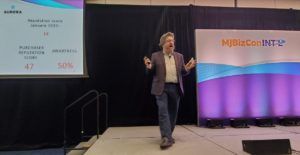 Dave Scholz of Montreal-based Ledger uses the stage at MJBizConINT’L to reveal the results of the market research firm’s new study on Canadian cannabis companies’ reputations among consumers. (Photo by Matt Lamers)

The scandal that made CannTrust the least-trusted cannabis company in Canada is weighing on the reputation of the entire industry, according to a new survey by market research firm Leger.

Dave Scholz, a partner at the Montreal-based company and a reputation expert, said that is largely because Canada’s cannabis companies – even the largest ones – haven’t completely differentiated themselves yet.

“It’s a new industry, so no company has really differentiated itself yet. One bad apple can spoil the bunch, and that’s what’s affecting all their reputations.”

The Leger survey was conducted online from July 12 to July 15 – about a week after Ontario-based licensed cannabis grower CannTrust was sanctioned by Health Canada for conducting unlicensed cultivation and providing inaccurate information to the federal regulator.

Scholz released the full results of the survey during a presentation at MJBizConINT’L.

The poll found that Alberta-based Aurora Cannabis maintained its narrow lead over Ontario’s Canopy Growth as the “most reputable” marijuana company in Canada.

Scholz said the poll results have positive takeaways for the cannabis sector.

The first survey, conducted earlier this year, found that levels of awareness about the producers were extremely low across the board, laying bare the challenges ahead as legal cannabis businesses look to make lasting impressions on consumers.

“If there’s anything positive to come out of this, it’s that people are starting to be aware of the brands that are manufacturing and selling cannabis,” Scholz said.

“That’s the positive part, but the bad part is that we’re not giving them necessarily a good story of what these companies are about right now.

“For a fledgling industry, that’s a pretty good start.”

To isolate the results to consumers and nonconsumers, the July survey asked the 1,521 respondents if they had consumed cannabis, and 16% of Canadians reported buying cannabis through a legal channel since October 2018.

Aurora and Canopy maintained their positions as the most trusted cannabis companies.

The results show that their reputations rose significantly when only consumers are considered.

Among those who had purchased cannabis through a legal channel since last October, Aurora’s reputation score was 47, Canopy’s 34, Aphria’s 21 and Hexo’s 19.

“When I ask people who have purchased cannabis, Aurora’s score increases to 47. So that’s a very positive score,” Scholz said.

“The people who are buying are feeling more positively about cannabis companies than the rest of Canada. So your current market is saying good things about you.”

Scholz said the goal for the regulated industry should be to start appealing to new potential customers and to build that reputation with them as well.

Among consumers, Aurora led in the “good opinion” category with 51%. Only 3% had a bad opinion of the Alberta company, and 46% weren’t sure.

Aphria closed out the top three with 25% positive, 4% negative and 73% unsure.

CannTrust has some ground to make up, as the company fell to last among the 19 companies in the survey – 11% had a bad opinion and 20% had a good opinion.

But CannTrust is doing things right by being more forthcoming, according to Scholz, and it’s possible for the company to recover.

The company’s sweet spot is that 25% of those surveyed know of the company but have no opinion, he added.

“Do not confuse brand and corporate reputation,” he said on stage.

So, for companies to improve their image, they’re going to have to help create positive narratives.

“The amount of product that’s available, the problem of accessing it at retail outlets, and just the general issues of a new industry in the first year is what we’re hearing a lot about,” he said.

“If I was one of these cannabis companies, I would find some positive aspects that I can talk about within the regulations.

“So people who are starting to learn about (your company) are learning good things, as opposed to, ‘Here’s another cannabis company that’s potentially growing product illegally because I’ve heard someone else is.'”

To avoid rising and falling with the tide of the sector, Canada’s leaders in the regulated cannabis industry are going to have to create their own stories, Scholz said.

The reputational expert also suggests that companies have a plan in place in case a crisis hits.

And if a scandal does befall a company, act quickly.

“React quickly. React transparently and honestly,” he said. “If there is a reputational crisis happening, do not try to drag it out by hiding it.

“Get on top of it as fast as possible. We’ve seen examples of that where one negative story compounds into a second negative story.

“Getting out from underneath that reputational crisis can be very difficult, and you need to make sure that you’re on it as fast as possible.”