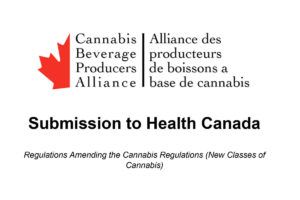 An industry group representing cannabis-infused beverage makers in Canada wants the government to ease proposed regulations to put businesses on a more competitive footing with the illicit market.

In a submission to Health Canada, the CBPA agreed that many of the proposals – including the limit of 1,000 milligrams of THC per package of cannabis concentrates – are sufficient to combat the illicit market.

However the group highlighted several areas it would like changed.

The first is a proposed regulation that would force companies to produce cannabis-infused beverages in buildings separate from other food production.

That would add millions of dollars in costs for businesses – much of which could be passed on to consumers, said Darrell Dexter, head of the group, and former premier of Nova Scotia.

“If one of your stated goals is to try to eliminate the illicit market, when you drive up the consumer price, then that defeats that goal,” he told Marijuana Business Daily.

“All those costs end up being passed along to the consumer.”

Health Canada is reviewing thousands of submissions from public consultation, and final regulations are expected to be released in the coming months.

Canada’s laws require new classes of cannabis – edibles, extracts and topicals – to be added to Schedule 4 of the Cannabis Act no later than Oct. 17, 2019, meaning most new products could reach consumers in late 2019 and early 2020.

The group wants also the prohibition of alcohol-related terms such as “wine” and “beer” removed from the final regulations.

“If current proposed regulations stand, a complicated description such as ‘fermented grape juice’ or ‘fermented extract of cereal grains’ to try to convey a simple message will be very confusing for the Canadian consumer,” the group said in its suggestions.

“People recognize brands. They recognize the style of container they come in. If you eliminate the ability to put brands in place, then what you’re doing is reducing the ability of the consumer to know what it is they’re buying,” Dexter said.

“When you take the brands out of the equation, it doesn’t make it more safe, because you’re taking away one of the things people recognize as part of a regulated industry.”

Infused beverages are expected to take up about 10% of the overall cannabis market down the road, according to a GMP Securities report, behind vape pens (20%) and edibles (15%).