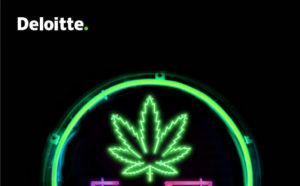 Canada is on the cusp of prying open a market for edibles and alternative cannabis products valued at 2.7 billion Canadian dollars ($2 billion), but sales will begin as “a slow burn” come October before gaining momentum, Deloitte estimates.

For its third annual report on Canada’s cannabis industry, Deloitte conducted in-person interviews with cannabis industry experts, an online survey of 2,000 adults and utilized a strategic alliance with data and analytics provider Headset.

Regulations permitting cannabis edibles, extracts and topicals are legislated to come into force no later than Oct. 17, 2019, although experts have warned against expecting a large rollout of most products until 2020.

The final regulations outlining the rules for the new market could be published as soon as June 26.

The report comes with the sober prediction that the number of Canadian licensed producers will fall to almost half the current level. As of March 30, there were 179 federal license holders (all classes) and another 579 applications were pending in Health Canada’s queue for standard licenses.

The report will help businesses “understand Canadian consumer sentiment on cannabis edibles and other alternative products coming with Cannabis 2.0 legalization.”

“We offer our perspective on how companies can win in the cannabis market while the industry is still forming,” according to the report’s authors.

“Our research suggests that the new alternative cannabis products becoming legal in late 2019 will be a significant opportunity for players in the cannabis market. The new options will address consumer interest among current and likely Canadian cannabis consumers.

“We believe that cannabis players need to build strong business fundamentals as the regulatory and business environment settles, requiring patience, perseverance and confidence – along with a well-developed business strategy backed up by hard data.”

Alcohol makers with no or little exposure to the cannabis industry may have reason to worry.

One-third of likely cannabis consumers see marijuana-infused beverages as an alternative to alcohol, according to Deloitte.

That could further fuel anxiety among beer makers such as Denver-based Molson Coors, which recently warned shareholders that the rising tide of legal cannabis could take a bite out of the company’s profits.

Could “Cannabis 2.0” cannibalize sales of marijuana products already on the market?

“Not yet,” according to Deloitte’s research.

“Fewer than one in five current or likely respondents say their edibles spending would replace spending on other products,” the report continued.

“Nearly half say they’ll buy edibles as well as the products they’re already buying – and a similar proportion aren’t sure. This suggests that Canada’s domestic cannabis market has room to grow.”

Consumer spending on infused beverages will probably complement their purchases of other marijuana products, according to Deloitte’s survey, which found that 53% of likely consumers and 44% percent of current consumers say they will buy beverages in addition to other products.

Innovation and scientific research are going to be key if Canadian marijuana companies want to maintain their competitive advantage over the long term.

The report surmises that the “enormous” global cannabis opportunity is Canada’s to seize.

How enormous? Deloitte estimates the top cannabis markets are worth $100 billion today and will rise to $194 billion by 2025.

“Canada’s cannabis cultivators, processors, testers and retailers continue to have important competitive advantages over their counterparts in more restrictive jurisdictions – but first-mover advantage has a shelf-life,” according to the 2019 Cannabis Report.

The report urges Canadian firms to move fast to secure market share in countries that legalize or decriminalize recreational and medical cannabis.

“Canada has a unique opportunity to demonstrate how to roll out cannabis effectively and safely while managing and aligning stakeholders’ expectations.”

Later, as the global cannabis market matures, Canada will “inevitably” lose its advantage in certain parts of the value chain, notably cultivation, the report states.

In 2018, there were over 700 transactions in the cannabis sector.

Deloitte believes such a frantic pace of M&As will continue for the time being, fueled by strong growth potential for legal edibles and infused products as well as international expansion and growing interest from alcohol, tobacco, pharmaceutical and consumer packaged goods companies.

However, “as the industry matures, we expect M&A activity to slow and valuations to normalize. There will likely be some consolidation in the Canadian industry to absorb excess capacity, and there is an expectation that the number of Canadian licensed producers will fall to almost half the current level,” according to Deloitte’s report.

“These traditional companies will bring scale, brand and immense customer insights to bear on cannabis.”

As for valuations, Deloitte says they are likely to remain “elevated” for now, influenced by “historically higher valuations in prior transactions.

“The ‘gold rush’ sentiment surrounding the cannabis sector is another factor playing a role in the valuations we’re seeing, if a less rational one.”

Other takeaways from Deloitte’s 2019 Cannabis Report: