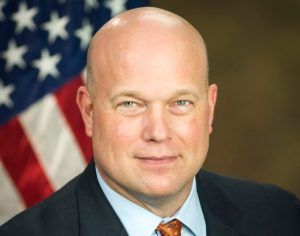 (This story has been updated with more details and comments from Alternate Health.)

Whitaker was a controversial figure during his short term running the U.S. Department of Justice under President Donald Trump. Whitaker served as acting attorney general for three months after Jeff Sessions resigned in November 2018.

Whitaker’s role at Alternate will involve “strategically advising” the CBD company, according to a statement.

“I think there is serious potential in the CBD industry,” he said, “and everyone at Alternate Health will work hard to be a leader in the industry.”

The company said Whitaker will coordinate legal matters and develop its legal strategy as Alternate expands into new markets.

In early May, Alternate announced that it was entering the CBD-infused product market through a $20 million agreement to acquire Southern California-based Blaine Labs. Later that month, Alternate said it was pivoting to exclusively focus on “CBD product sales and cannabinoid medicine.”

In announcing the addition of Whitaker, Alternate also said it is divesting its marijuana assets.

Scott Holtby, vice president of communications, said the company’s pivot away from marijuana is not related with bringing Whitaker and his firm into the fold.

He said Alternate brought in “zero actual direct (marijuana) revenue, so that’s part of the reason we decided to change tack a little bit.

Alternate has not yet signed any definitive deals to divest of its cannabis assets, he said.

Whitaker will also be charged with investigating “certain actions in Canada by a California-based competitor,” according to the company.

Holtby would not disclose the name of the California-based competitor.

Whitaker’s compensation will be through a traditional legal retainer. No stock options are part of the arrangement.

A former U.S. attorney in Iowa, Whitaker is not the first high-profile Republican to become involved in the cannabis industry.

Whitaker raised eyebrows in his short tenure over the agency that includes the U.S. Drug Enforcement Administration.

He was criticized for business ties to Trump and for comments critical of the investigation into Russian interference in the 2016 presidential election.

The state of Maryland challenged the legality of Whitaker’s appointment. The U.S. Supreme Court declined to hear the challenge, but Whitaker left the Justice Department soon after.

Alternate, which lists on the Canadian Securities Exchange under the ticker symbol AHG, is also eyeing expansion in Latin America through a joint venture agreement with Oltecate Enterprises in Mexico.