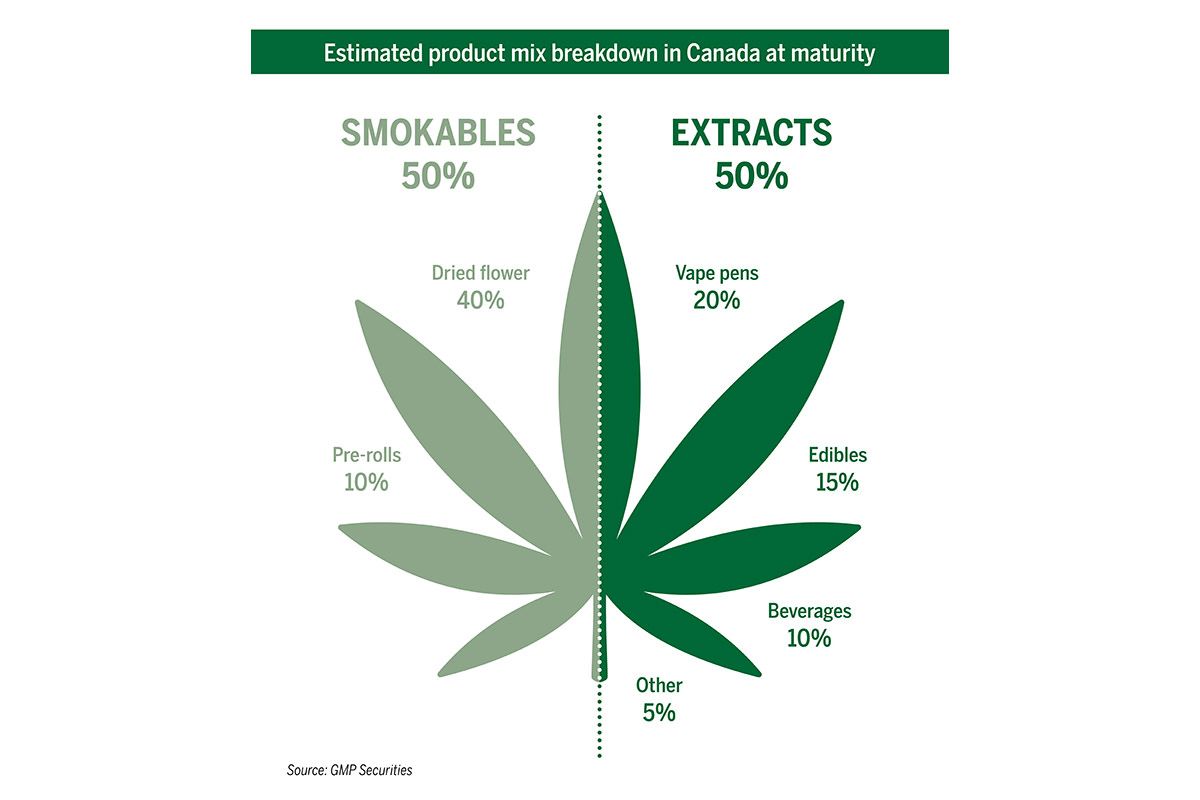 The marijuana extraction sector in Canada is still in “the early innings” and poised for significant growth after the federal government legalizes concentrates and edibles later this year, according to a market analyst.

“What we like about extractors is that there is a long runway of growth ahead,” GMP Securities analyst Martin Landry told Marijuana Business Daily.

“Demand for extracted products is going to explode this fall with the arrival of vape pens and infused products.”

In a report to investors, Landry wrote that the upcoming regulations will open the floodgates for a huge new segment of the cannabis market.

The new regulations, to be enacted by Oct. 17, will pave the way for the production and sale of cannabis extracts, topicals and edibles – but it will likely take months after Oct. 17 for those products to reach shelves as businesses build up inventory and set up sales infrastructure.

The GMP report foresees extracts eventually accounting for half of Canada’s market for cannabis.

“Cannabis extraction is a critical step in the production of value-added products such as cannabis oils, gel caps, vape-able products, cannabis-infused food, topicals and infused beverages,” according to Landry’s report.

In the fourth quarter of 2018, Canada’s medical and recreational markets were dominated by dried flower products, while extracts represented about 13% of gram-equivalents sold, Landry estimated.

That low penetration can be attributed to the limited offerings from extracts, which so far have been oils, capsules and sprays.

“New legislation expected to be passed in 2019 will allow for the sale of more complex extract products like vape-ables, topicals, edibles, beverages and other concentrates,” Landry said.

“All of these new products require cannabis extraction, which positions Canadian extractors well, in our view, providing sustained demand for extraction services for the coming years.”

Based on more developed markets in some U.S. states, the GMP analyst estimated extract products could represent about 50% of sales in the Canadian market over time.

While some of the larger cultivators are doing extraction internally, others are outsourcing some of the process so they can use internal resources and capital elsewhere.

And some are doing a bit of both.

Canopy Growth, for example, inked a multiyear processing and extraction agreement with HollyWeed Manufacturing and Extracts.

“To be able to take the dried flower, turn it into a vape pen, brand it (for a major licensed party) – for instance – package it and ship it directly to the provinces without (that LP) being involved at all. When these extractors get to that point, you’re talking about margin expansion,” Landry said.

“You’re talking about being a key supplier to your customers. That’s a long runway to revenue growth and margin expansion.”

In the report, Landry wrote that “unprecedented growth” by most LPs “is critically stretching their resources given their infrastructure is not fully built yet.”

“As such,” he continued, “extractors have the opportunity to become indispensable white label partners and unload some of the burden and growing pain that LPs are currently experiencing.”