Canada has a cannabis packaging problem: Here’s what businesses are doing about it 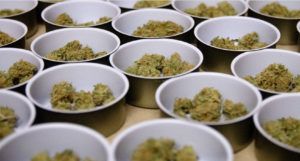 How much? One cannabis industry executive estimated that 10,000 tons of packaging was generated in the first year of legalization, most of which was destined for landfills instead of recycling bins, he said.

And executives at those companies see it as a win-win opportunity for their companies and the industry.

“There’s an environmental protection opportunity on the one side, and then there’s an opportunity to get away from fossil fuels on the other side,” said Atul Bali, CEO of Packaging Naturally, an Ontario company that is one of the businesses offering alternatives to plastic packaging.

Health Canada, for its part, does not track the amount of packaging used in the industry. But the federal regulator supports such efforts.

“Health Canada welcomes licensed processors to use innovative and environmentally sound packaging approaches, provided the requirements in the regulations are satisfied,” the health department said in a statement.

“There is no regulatory requirement under the Cannabis Act that stipulates that plastic must be used by cannabis processors.”

Recent amendments to the federal regulations permit smaller packages to use “accordion,” or peel-back type labels, to help reduce the amount of waste created by cannabis product packaging.

Marijuana Business Daily spoke with some executives looking to position themselves to capitalize on this upcoming opportunity.

Packaging Naturally’s approach is to not use any plastic.

The company offers cannabis producers the ability to package their products in containers made from recyclable organic materials.

Company executives estimate that 3.5 grams of flower, on average, comes with up to 78 grams of plastic packaging.

Organically recyclable packaging “is more environmentally responsible. But more importantly, even if it doesn’t go into a composting facility and it ends up in landfills, the degradation of our product is far quicker than fossil-based polymers,” said Bali of Packaging Naturally.

The rate of degradation depends entirely on the landfill, he said, but it ranges from thousands of years for some plastics to roughly 30 days for his product.

“The industry is leaning toward a compostable solution, which is a much more sustainable offering than single-use plastic,” Bali said.

Packaging Naturally is in late-stage dialogue with a half-dozen large companies in Canada.

Nitrotin offers an alternative to plastic packaging that is recyclable and features an aluminum shipping container.

The company’s CEO, Eric Marciniak, called the amount of plastic waste generated in the regulated cannabis industry “a disgrace.”

Marciniak sees sustainability becoming an important component of the marijuana industry in the near future, and he is positioning his business to be part of the solution.

He said environmental factors soon will carry a greater weight in the decisions of large cannabis businesses.

Marciniak said his aluminum containers are easier to recycle than the plastic packaging that’s commonly used in the industry today.

“There’s a lot of benefits to the recyclability of aluminum,” he noted. “Regarding aluminum, 80% of what starts out as cans are still in the market as a can because of recycling. We’re not contributing to that big mess.”

He said plastic use should be discouraged.

“Why would we want to use plastic?” he asked. “It’s a disgrace. Plastic has a lot of things going against it, except price.”

Nitrotin has three confirmed contracts – including one with Alberta-based licensed grower Freedom Cannabis – and another half-dozen letters of intent.

The program signs up retail partners, who receive a collection box for their store.

Retailers ship any plastic containers they collect to TerraCycle, at the latter’s expense.

TerraCycle, which specializes in hard-to-recycle materials, melts down the plastics it receives into pellets that can be transformed into new products.

“The idea here is we are diverting that waste, which otherwise would have ended up in landfills, and recycling it into a variety of products and giving it a second life – ultimately not adding to an existing problem but creating a solution,” said Gina Herrera, TerraCycle’s senior director of brand partnerships.

Not all plastics recycled curbside are ultimately recycled, a capability that varies by municipality.

TerraCycle, by contrast, recycles everything it collects.

“Everything that comes in through the program is recycled, including some plastics that may not be able to be recycled curbside,” Herrera said.

Freedom Cannabis, a privately owned marijuana producer, is one of the few federally licensed growers committed to not shipping products in plastic containers.

CEO Troy Dezwart said he did not want to add to the amount of waste being generated by cannabis businesses.

The solution lead him to Nitrotin.

“Given how committed the company is to sustainability, it made sense for us to go out and look for alternatives (to the nonrecyclable plastic packaging),” he said.

“Not only are they fully recyclable, it’s a great way to preserve the flower. It gives the product a longer shelf life and helps preserve it.”

Not using plastic is part of the company’s plan to differentiate itself from other cannabis business, many of which are struggling to create a unique identity.

Freedom’s products are expected to be on shelves in December.