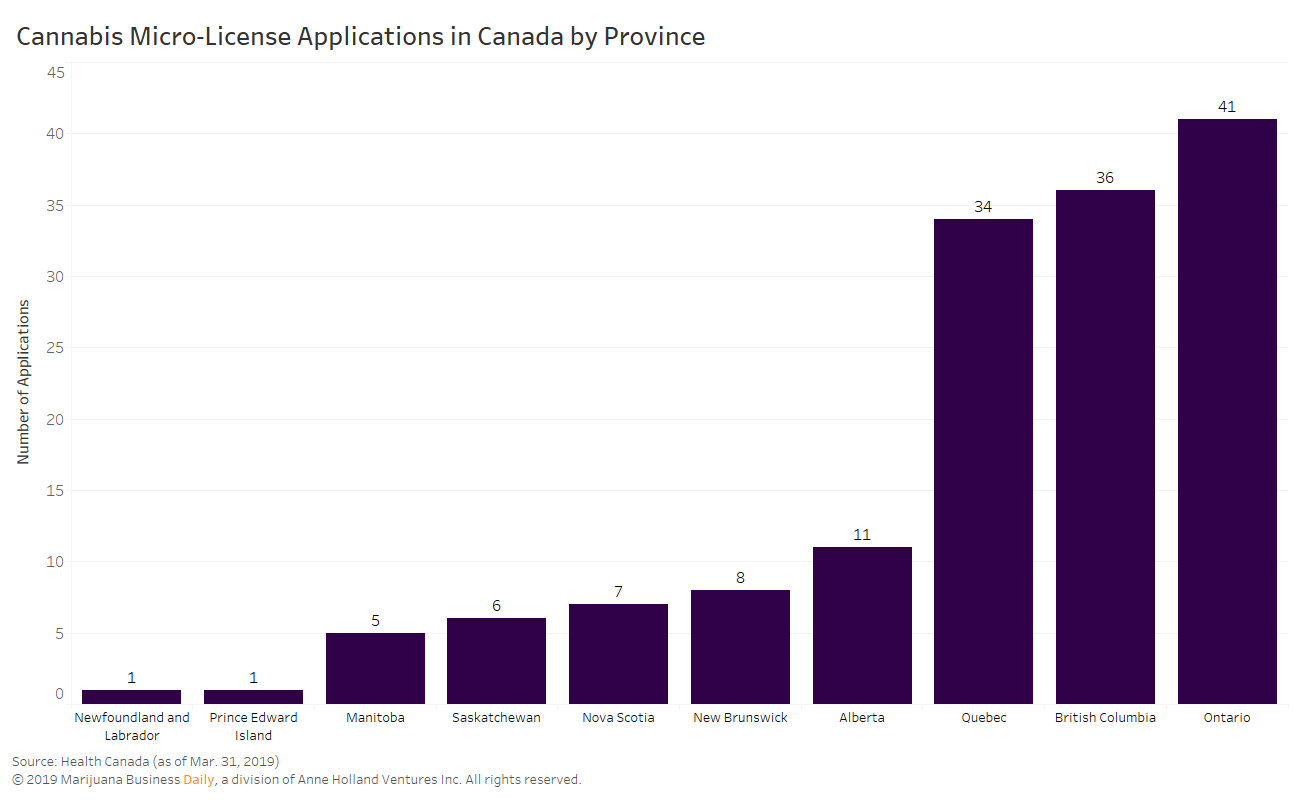 (This story has been updated to include circumstances involving the issuance of the first federal micro-class cannabis license. – ED.)

A relatively new class of federal marijuana licenses for smaller businesses in Canada is proving to be more appealing to entrepreneurs in Ontario than in British Columbia – home to most of the country’s craft cannabis industry – largely seen as a reflection of trends in standard licenses.

Micro-class licenses were introduced by the federal government last year. The licenses appeal to smaller businesses, though they still come with a hefty price tag.

As of March 31, Health Canada had received micro-license applications – for cultivation, processing or both – for 150 sites.

“This company was originally licensed under the Access to Cannabis for Medical Purposes Regulations and transitioned to a micro-cultivation licence under the new licensing rules,” spokeswoman Tammy Jarbeau said in an email.

The regulator said it cannot name the company because it is considered confidential business information.

Sherry Boodram, CEO and co-founder of Toronto-based regulatory consulting firm CannDelta, said the provincial breakdown of applicants is consistent with the distribution of standard cultivation licenses.

That’s partly attributable to municipalities in Ontario being more comfortable with the idea of having cannabis facilities located within their boundaries.

“Municipalities understand what that means,” Boodram said. “I think they’ve worked out their bylaws a little bit more, in terms of what is accessible and what the expectations are.”

She expects British Columbia to continue making up ground on Ontario.

“The more licenses get approved, the more comfortable people will be with taking that leap of faith, especially now that applicants are required to have the sites built out,” Boodram said.

Her advice for prospective entrants is to get all their ducks in a row before starting down the application path.

Entrepreneurs can set themselves up for success by calling in experts early, when necessary, to help with facility design, regulatory consulting – “any kind of contractor they need, even from a financial perspective. Start having those conversations to make sure they’re set up for success,” she said.

“There’s a lot that goes into it, especially with having the facility built out and having enough capital.”

Boodram said Health Canada’s new requirement to start the federal application process with a completed facility will be beneficial in the long run.

“It does allow for people who are more serious or qualified to apply. In the long term, it will be better. There will be more applicants who are ready to go,” she said.

“If people are not financially able to fulfill that commitment, they’ll know earlier on.”