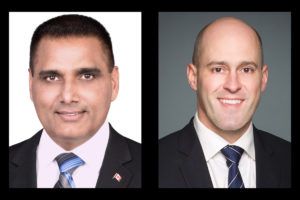 Two conservative politicians in Ontario, Canada, one representing a federal riding (electoral district) and the other provincial, have joined a British Columbia company engaged in the ancillary cannabis market.

Vancouver-based ParcelPal brought in federal representative Ben Lobb and Parm Gill, a member of the Ontario Legislative Assembly, to advise the company’s board of directors.

“They’re going to advise us in general about business in Ontario and give us some feedback on some of the regulations and legislation that are currently active so that we can better navigate through some of the hurdles that we are facing, as far as administrative and regulatory affairs,” ParcelPal spokesman Peter Hinam told Marijuana Business Daily.

“We’re looking for whatever we can use to help us guide through those channels appropriately, but also expeditiously.”

Lobb and Gill will receive a small amount of options for their role on the advisory board. No other compensation is being offered, according to the company.

ParcelPal launched its cannabis strategy last September and endeavors to deliver marijuana, grocery, retail and alcohol in every major city in Canada.

One of those markets is Ontario, which recently canceled a public tender for same-day delivery of cannabis.

“We are still confident we will be in Ontario in some form or fashion in this calendar year. Whether that’s delivering cannabis, I couldn’t say,” Hinam said.

With the ruling Liberals trailing in opinion polls, a federal election in October may have implications for the cannabis industry.

“(Conservatives) understand that this is going to be a major business, not only in Canada but globally,” he said.

“Conservatives are typically very strong with pro-business, economics – and I believe they see the future as far as the amount of revenue and jobs that can be created in this industry.”

Kim Campbell, prime minister in 1993, will keynote the second annual MJBizConINT’L in Toronto in September.

ParcelPal trades under the ticker symbol PKG on the Canadian Securities Exchange.